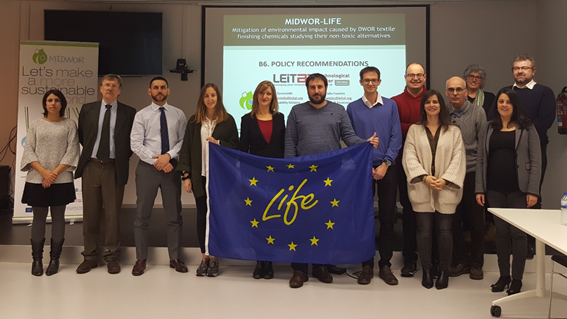 On August 31st, the European project MIDWOR-LIFE completed its cycle and reached its official ending. The project, which focused on the study and evaluation of safer and greener alternatives for durable water and oil repellents (DWOR) used in the textile finishing industry, was ongoing since September 2015 and it had a duration of 3 years.

The project has arisen a lot of attention to high-level stakeholders, which have been engaged in different ways during the project, including the Organization for Economic Co-operation and Development (OECD), the European Chemicals Agency (ECHA) and the European Textile and Apparel Confederation (EURATEX).

While the project official end date was August 31st, the team will continue to disseminate and communicate the project results as part of the After-LIFE communication plan including the presentation of the project in a webinar organized by the Global perfluorinated chemicals (PFC) group from the OECD on October 30th. The group is composed of international experts with the mission to promote alternative substances to hazardous perfluorinated substances used traditionally in the textile finishing industry, among others, to provide water and oil repellency. The team will present the different alternatives analyzed during the project with the goal to propel a global substitution toward safer and ecological substances.

The third newsletter released on July highlighted the different activities during the lasts months, including the project final event held in Brussels, the publication of a broad-audience report summarizing the main project outcomes (Layman’s report) available in all partners’ languages (Spanish, Catalan, Italian and Czech) besides English, the web tool launch in the project website to facilitate companies’ self-assessment of the environmental impact caused by  different DWORs, and the publication of several technical reports from the project.

The major project outcomes have been the technical and environmental assessments of different alternative DWORs versus conventional ones. At environmental level, the results from the life cycle assessment (LCA) revealed that conventional fluorinated products have a negative impact in the range of 10 to 40 times larger than fluorine-free alternative products. On the technical level, alternative products achieved a water repellency matching the performance of conventional fluorinated products; however, its performance against oil did not reach an acceptable level. This fact raises the need for establishing an equilibrium and rationalization of the requirements at the design stage to find a balance between environmental impact and technical properties according to the final application of the treated textile material.

We use cookies to ensure that we give you the best experience on our website. If you continue to use this site we will assume that you are happy with it.AcceptNoPrivacy policy